HomeJiří And then I said to myself: ‘Enough!’

And then I said to myself: ‘Enough!’

I could write for hours about what’s like to realize something new. That’s especially true when I’m now journey durin which new experiences, regulations or simple understanding come nearly every day. I don’t think it’s necessary to go that far in order to realize something, though. Still, this way is a rather convenient one. After all, one is much less surrounded by the system , which can, well, somehow burden the mind. There’s not as much fuss that could overwhelm many of one’s thoughts.

Fine then. So, what kind of realisation is it this time? It’s almost too obvious to write about it. However, the path leading to it requires both patience and time. I guess I’ve heard the following countless times – ‘You can’t please everyone. You can’t account for every single person. You’ll get nowhere if you try to find a compromise for each differing opinion you encounter…’ Fine then, but how should I really understand those almost notorious statements? And do I really agree with them? Is there anything I them at all worth contemplating? And how can I locate the core of such thoughts? They’re used so often and in very much contradictory situations. Moreover, you can hear them pronounced both by wise and lazy people.

I started thinking about this the moment I heard myself saying: ‘You can’t satisfy everyone, it’s your journey and your choice to share it with others.’ Being UNcompromising? But that’s an oversimplification, I said to myself. Sometimes a compromise can be a wise move. Other times a compromise can point you in the right direction but it doesn’t lead to reaching your goal. So, when do you compromise and when you don’t? That riddle was there for me to solve when I was standing at the edge of the island. I was looking at the shore of the next island eight kilometers away through the roaring sea. The sea was just rough enough for me to admit that with my level of experience there’s some chance of making it across. But it’s also just rough enough for me to admit that despite my experience there’s also a chance of the opposite result.

Yes, that’s a rather curious moment for me. I was under pressure of the circumstances and prejudices. I knew that there were more than ten islands ahead of me. That’s more than 150 kilometers on the open sea. I knew that the weather forecast wasn’t promising anything like stable conditions. Comments of people who like to see my progress forward were running through my head. My brain was telling me that I had only about an hour for setting off if I were to stand a chance of getting to the next island. And I was also aware that if I didn’t head forward on that day I might not manage to get across the islands through whole winter.  I was sitting at the shore and asking myself, asking the sea and asking the wind. Should I stay or should I go? I was trying hard to find the right answer and to make a decision.

It was at that point when I truly admitted to myself that I was caring about what all the people following my journey would think. What would those who hoped to see me making it to another island say. And how about those who found it too risky. And then I said to myself: ‘Enough.’ ‘This is your journey. You’re sharing it because you enjoy it and not because you want to become famous or to make someone happy. It’s not your duty to make the journey so that everyone likes it. Actually, it’s not necessary for anyone to like it. It’s your own decision and choice what you do, share and give to others. You alone are financing the whole thing, if you’re supported by such people who want to SUPPORT you and not BUY you.’

I got up and said thank you to the wind, sea, and also myself. I decided to try getting across, but not today. I realized that what I wanted was to devote this winter to freediving, to new experiences and not to sitting freezing at some beach waiting for the weather to grant me a few good days for moving forward. So, I sat down into my boat, turned around and paddled back to civilization for six days. Then I took the kayak out of water, fought the first ferry followed by a plane, and flew to Egypt to do diving during the winter. I feel like leaving the explanation why to Egypt for next time. 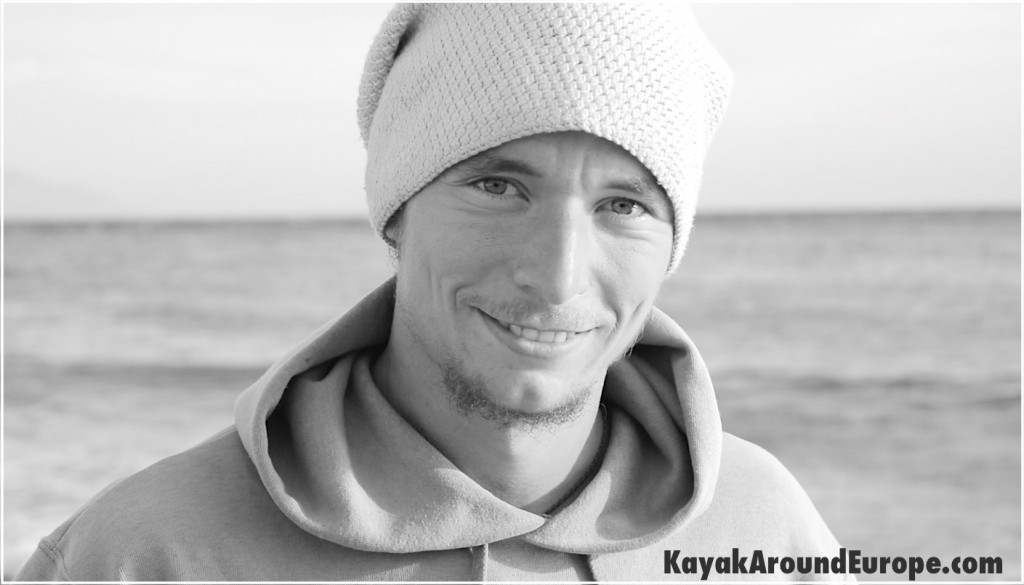 P. S. Thanks for your support. Thanks for your comments that enrich me and through which I’m able to grow personally. Once again, I realized how hard it can be to admit the truth when I’m both my own judge and defendant.