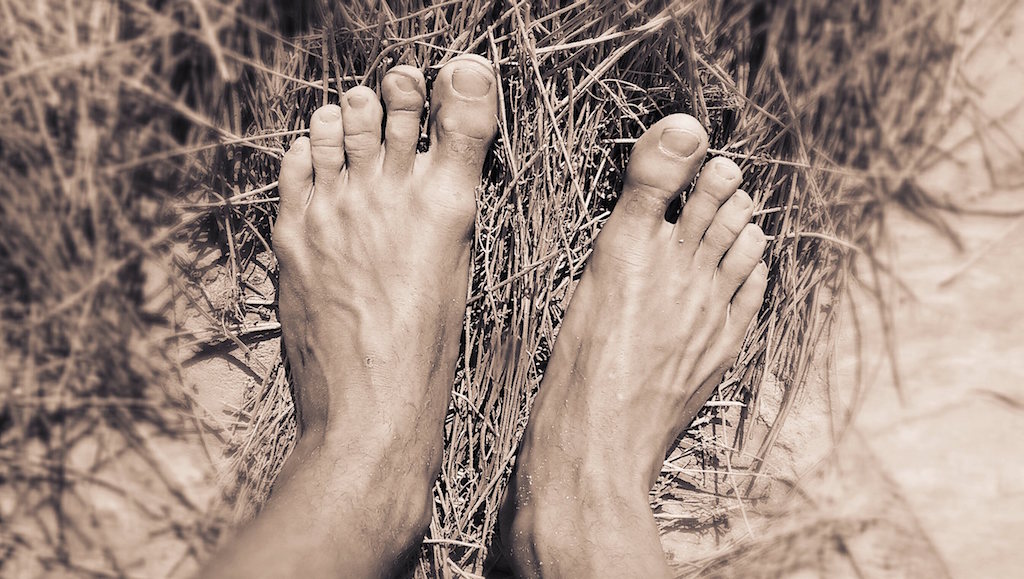 A preconception number 108 tested out. That’s how I’d call the moment when I sat down in the snow and started taking off my shoes.

It’s a beautiful winter afternoon. The fields are blanketed by snow and the sun keeps peeking through the clouds from time to time. It’s Friday, actually, and, although my working hours are not finished yet, I’ve already finished everything that was needed. I look around the snowy countryside. ‘So, now what?’ I ask myself. ‘Is it really only a preconception that you need shoes or is it true that nowadays it’s impossible to exist without them?’
I didn’t even wait for any more thought to come and sat down into the snow and started untying my shoe-laces. Would it feel cold? Would my feet freeze? Would I get a cold? I hushed those thoughts away quickly before they could’ve hatched as yet another set of preconceptions. I put the shoes away and crunched into the soft snow with my full weight. It’s cold but not unpleasant. My first steps and, suddenly, I was leaving only barefoot footprints in the snow.

About thirty minutes later I came back for my shoes. I didn’t feel chilly or uncomfortable. It even seemed as if somebody pumped a huge dose of new energy into me. ‘That would be the increased blood circulation from the chill,’ I thought to myself, and put my shoes back on. Not long time ago, I thought that it’s impossible to walk barefoot on snow without at least some small health damage. Well, what a twist – I’d just finished my first barefoot snow stroll and I was feeling great.

‘So, what should I do with this new revelation?’ I asked myself. ‘I want to try it again…’ was the answer that sneaked into my head. That was winter in 2014.

From the beginning of April 2015 I was, basically, doing nothing else than trying to pack all my stuff into my kayak. Although the kayak is rather spacious the huge bulk of equipment just wouldn’t fit in. I tried placing all the things in in a various order. Nevertheless, eventually, I had to start taking some things off my packing list because it’s simply impossible to squeeze them in.

And, so, I came to the item labelled as SHOES. 1 000 days on a journey, various different environments, surfaces, temperatures. For heaven’s sake, what kind of shoes should I take? Roomy and heavy boots were out of the question. A pair of small light neoprene shoes for going into the water. ‘Great!’ I thought. And what about for when out of the water? Towns, cities, mountains, trips … I finally decided for the shoes I was wearing at that moment. Those were my favourite ones and I believed that they’d be useful in many ways, but also, they’d, surely, have to fit somewhere into the boat.

On the first two days of my journey I had the advantage of having a company. So, everything I wasn’t able to pack into the kayak at the last minute I could easily give to someone else. The real drama started on the second day. Everyone’s getting ready to head home and I was going forward. So I stuffed the last centimetres of free space in the kayak and hanged some things on it from the outside so it looked almost like a Christmas tree. Still, regardless of all my efforts there’s a pair of shoes left lying on the ground next to the kayak and it just couldn’t continue with me. So, I was left only with one pair of neoprene shoes useful in water.

Considering that at night the temperature dropped way below zero and that it’s snowing during the day, it’s soon clear that the neoprene shoes were impossible to wear for a longer time once they got wet. So, once again, it’s time to take my shoes off. It’s cold and wet all the time but, again, nothing I couldn’t stand. When I started my dry part of the journey and I had to transport the kayak between two rivers my father gave me a pair of sport sandals. That was when I was pushing the kayak over the mountains and I wasn’t really thinking about the problem of having enough space in it. It’s quite comfortable to walk the 120 km in the sandals if I didn’t count a few blisters and bruises here and there.

Yet again, in Linz it’s time for no excuses and one pair of shoes was left lying next to the boat for the second time. And once more, I decided for the neoprene shoes that could come handy once I have to walk on some sharp rocks or so. After a week of walking the neoprene shoes were finally dry again. So, I wrapped them up carefully and with the words ‘hopefully, you’ll be useful once I get to the see,’ I packed them back deep into the kayak. And so it happened that I sat down in the kayak and I was BAREFOOT.

It’s the end of April and the weather’s still chilly sometimes. When I got hit by a storm in Bratislava I was grinding my teeth. But I didn’t put the shoes back on. The first six weeks were quite hard. My feet were getting used to various different surfaces slowly. During the second month it’s recognisably better. At least comfort-wise. By degrees I was discovering diverse advantages of being barefoot and I put my feet back into shoes only on very tough surfaces or when I didn’t want to attract attention.

One of those involuntary ‘put-on-your-shoes’ moments happened in Istanbul. Due to the inability of the local police to understand that a kayak is neither a sail-boat nor a motor-boat I spent the first four days in the city illegally. Or, to be more precise, for four days I was forced to wait for receiving a stamp into my passport that would grant me the right to stay legally in the country of Turkey. Although the police let me move freely around the city, the family that provided accommodation for me and vouched for me asked me to wear shoes, so that I didn’t attract unwanted attention in the streets. If policemen stopped me for a routine check, by chance, then they’d, consequently, discover the absence of the stamp in my passport.

Everything ended well and after four days I got the stamp and took my shoes off again. Nevertheless, those four days in Istanbul were the hardest ones that I’ve experienced. The only time on my journey when I almost got sick. The only time when I had no will to make even one more step forward.

And then it happened! On the Greek island of Amorgos. I wake up on the concrete pier of the local port. The sun’s shining beautifully so, I decide to spread all my things that need to dry around the kayak, and I set off for a morning walk around the town. I’m walking for about an hour already when, suddenly, my intuition calls up on me. I realize that I left my neoprene shoes to dry up a little away from the kayak. I get this intensive feeling as if someone was about to steal them away. But I put the thought away – after all, it’s only a pair of really worn, wet and smelly shoes – who would want them?

After a delicious breakfast I come back to the kayak. When I check all my things I realize I’m smiling. First, because my intuition didn’t fail me. Second, because I don’t have to deal with the question whether to put on any shoes or not. Simply, because I have nothing to put on my feet anymore.

P.S. Thanks to anyone who needed my shoes more than me. May they serve you well.